In his new book, historian Edmund Hayes reconstructs the careers of the first leaders of Twelver Shiʿism, the dominant branch of Shiʿi Islam in the world today. These leaders claimed to be mouthpieces for the hidden Imam. ‘This is the first fully historical account of the formation of the foundational doctrine of Twelver Shi'ism in the 9th-10th centuries.’

In 874 CE the eleventh Imam died, and the Imami community splintered. Instead of a new Imam appearing, the institutions of the Imamate were maintained by the dead Imam’s agents, who asserted they were in contact with a hidden twelfth Imam. This was the beginning of “Twelver” Shiʿism. Between 874-940 CE, they helped to establish the doctrines and institutions of Twelver Shiʿism, the dominant branch of Shiʿi Islam in the world today.

Edmund Hayes - historian of the social, cultural and religious history of the 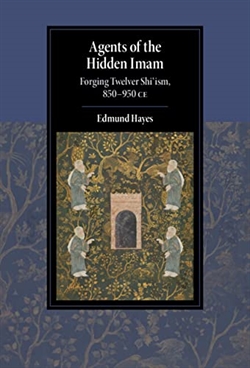 medieval Middle East - provides an innovative approach to early Shiʿism in his new book Agents of the Hidden Imam: Forging Twelver Shiʿism, 850-950 CE. ‘I was driven by the question: who really were the early Shiʿa?’, Hayes explains. ‘Scholarship on early Shiʿism neglects social history in favour of theology. Instead, in this book I look at the social and political context of religious groups: money, political rivalries, institutions, and ritual practice.’

In the book Hayes moves beyond doctrinal history to provide an analysis of the socio-political processes leading to the canonisation of the Occultation of the twelfth Imam. The complex and contradictory early Occultation narratives are dissected to show how it was the institutional positioning of the agents that allowed them to assert a quasi-Imamic authority by reproducing the physical signs of the Imamate: edicts; protocols of succession; legal and theological responsa; and the collection and distribution of alms taxes. Hayes: ‘My book is the first fully historical account of the formation of the foundational doctrine of Twelver Shi'ism in the 9th-10th centuries. It is interesting for anyone interested in Islam and its history, religious group formation or minority and oppositional groups and religious non-conformism.’

The book 'Agents of the Hidden Imam: Forging Twelver Shiʿism, 850-950 CE' can be ordered here. Want to know more? Edmund Hayes recently did a podcast interview through the New Books Network.