Prestigious award for book on gender and war

The book The Oxford Handbook of Gender, War, and the Western World Since 1600 - of which historian Stefan Dudink (RICH) is one of the editors - has received the Distinguished Book Award from the American Society for Military History (SMH). 'Our goal was to advance the scholarly conversation between gender historians and military historians, and the book, judging by this award, seems to have succeeded in that.' 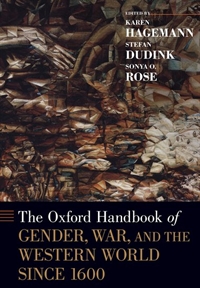 ford Handbook of Gender, War, and the Western World Since 1600 (Oxford and New York: Oxford University Press, 2020) was published in 2020 and edited by Stefan Dudink, Karen Hagemann and Sonya O. Rose. 'Military historiography to this day pays little attention to the complex role that gender plays in the history of military organisations, warfare, and the aftermath and memory of war', says Stefan Dudink, a researcher at the Radboud Institute for Culture and History (RICH). There is a respectable body of literature that considers war as an issue in which notions of masculinity and femininity play an essential role. However, this gender history of war has only marginally penetrated the discipline of military history itself.

The Oxford Handbook of Gender, War and the Western World since 1600 provides a historical overview of the relationship between gender, war and military culture by focusing on, among other things, war experiences on the home front and on the battlefield, gender-related war violence, war memories, military service and citizenship, and anti-war movements. Specialists on military and war history and experts on gender and women's history contribute in 32 essays, exploring how conceptions of gender have contributed to and been transformed by war and the military. The handbook chronologically covers the most important periods in warfare since the seventeenth century and focuses on Europe and the long-lasting colonisation and empire-building processes in America, Asia, Africa, and Australia.

The Society will present the awards at its annual meeting in Fort Worth, Texas, from 28th April to 1st May. There, the authors and editors of each award-winning book will receive an award plaque and a $1,000 prize.