‘We did not live in complete vain' - Unique, historical letters in digital laboratory

160 letters from a Jewish-German doctor about the upbringing of his three daughters, written between 1937 and 1943. The Drillingsberichte are like a time capsule that opens a gate to the past. Now - 85 years after the first letter - they are digitised, searchable and downloadable and offer a unique opportunity for researchers from different disciplines to work together.

Gerda and Felix with Beate and twin sisters Maria and Helli, © Helly Oestreicher

'It's hard to get started because of the abundance of material. The two little ones have completely "humanised" themselves during my absence. They play with each other and with the others. The "ball" is their greatest pleasure. They have the ball in their crib and give it to their sister when asked. They are great destroyers: all Beate's old picture books and the cardboard block boxes are torn to shreds. They gallop around the room with their little shoes. Maria is already standing and yesterday she ran from the door to the window on her own. Helli is a "cave explorer": she crawls under all the beds and suddenly pops up where you wouldn't expect her to. Beate has therefore started crawling, which she never did before. Apart from playing with the ball, she doesn't know what to do with her sisters and keeps a low profile so that the little ones don't take everything from her, which she marks with a big roar. (Felix Oestreicher, Karlsbad, 19 April 1937)

In April 1937, in Karlsbad (Czech Republic), the Jewish-German Felix Oestreicher begins writing letters about the lives of his daughter Beate (1934) and the twins Helli and Maria (1936). In 160 letters, he keeps his family members - including many scientists, doctors and artists spread across Europe - informed about the development of his three girls. Felix calls the letters 'Drillingsberichte', because they are about his 'Drieling’ (Dutch for triplets) and about the upbringing (the 'drilling') of his children.

Fleeing from the approaching war, the family moved to the Netherlands in 1938. Within the Netherlands they also moved six times, to an increasingly difficult situation. The family did everything they could to escape the war and emigrate outside Europe. They did not succeed. On 1 November 1943 the family was arrested by the occupying forces and deported to Bergen-Belsen. When liberation approached, the Nazis transported a large proportion of the Jewish prisoners by train to the East. This so-called 'lost transport' ended in Tröbitz (East Germany) with the liberation by the Russians, who ordered the villagers to take care of the people affected by hunger and typhus. Felix and his wife Gerda lost their lives, . but the sisters survived and returned to Amsterdam. 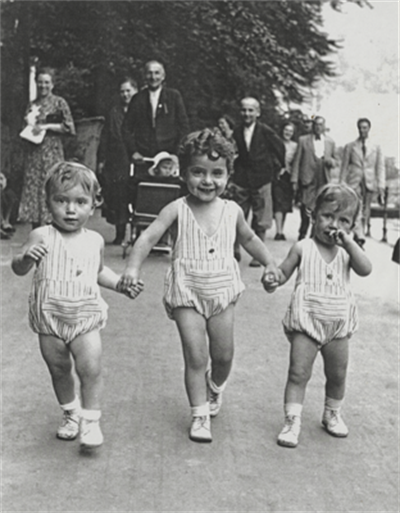 The girls' aunt Lisbeth kept all 160 letters Felix wrote about his daughters. When she died in 1989, Maria found them when cleaning out the attic. Using them, she compiled an album for her family. In 2010, her twin sister Helly gave the album to an acquaintance, Germanist and philosopher Professor Paul Sars of the Radboud Institute for Culture and History (RICH). He studies the letters, transcribes them from the sources and, together with colleagues and students, charts the Oestreicher family and its historical context.

The letter material is now - together with much additional documentation, such as drawings, photos and scientific articles by Felix, who was a doctor and researcher - digitally available through the Special Collections of the Information & Library Services of the Radboud University Nijmegen. ‘This collection is much more than a digitalisation of historical material', explains Sars. ‘It is an open source, downloadable, searchable and it should be the beginning of a digital laboratory, a platform for researchers from all sorts of disciplines.’

A historical educationalist, for example, could make excellent use of the material to research the German Bildungs-ideal from which Felix raises his daughters and about which he wrote frequently. He observed his children's behaviour keenly. They received a strict but loving upbringing, aimed at social behaviour and individual development. Because the girls could not go to school, a timetable was drawn up for them at home, which included breaks, gymnastics lessons and so on. 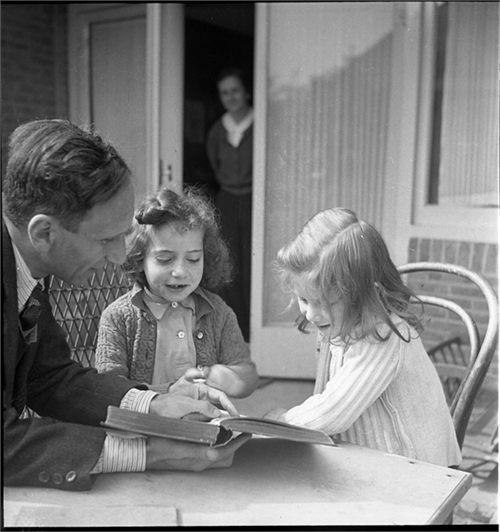 A researcher interested in Jewish history can use the material for research into, for instance, cultural mixing. In the 160 letters, for instance, the Jewish Seder eve is described only once, and the Dutch Sinterklaas (St. Nicholas) and German Christmas several times. A linguist can also devote a whole study to the letters. Over time, Felix wrote less and less in standard German. Dutchisms appear in the letters, but there are also Czech-coloured German words and family jargon. At the same time, he wondered whether the girls would later be able to read German, because 'they have just become Dutchwomen'.

Religion researchers can see that Germanic gods are discussed, which the children learned about from their grandmother when washing the dishes, and that the girls also wondered why they are Jews and why God allowed the war. 'By gathering around the source text on the website, we can create a community focused on coherent sub-studies,' says Sars. 'We want to invite colleagues around the world to join our network. I hope this will become a new way of working.'

From research to education (and back)

The story of Felix and Gerda and their three daughters is already available to German secondary school pupils learning Dutch and to Dutch pupils learning German. 'Together with German teachers and colleagues in Germany, Poland and Italy, we started developing educational materials in 2018. We looked at how we could tell the story of the German Jewish children who had to flee to the Netherlands. From there we created workbooks that can be downloaded for free. It is wonderful material for learning a language,' says Sars.

But there is another aspect: all three children survived the war and became successful. Beate obtained a PhD in chemistry and is active as a peace activist. Maria became a sociologist. Helli - who now calls herself Helly - is a visual artist and worked as a teacher at the Rietveld Academy. Sars: 'Despite everything, the children have learned to carry on, says Helly herself. Their grandmother was killed, their parents were killed, but they survived and carried on. That life lesson is very important for secondary school pupils.’

The translation of scientific research into society is an important motive for Sars. ‘When I started my academic career, after a few years I got the feeling: is my research really fruitful? I felt like one of those chamber scientists who publishes books for the four other specialists in the world. As far as I am concerned, you must think about the transfer of research from the outset, because the throughput of scientific knowledge in the alpha sciences is currently far too low. The knowledge we are gaining today about inclusion, about exclusion and about cultural diversity should reach secondary schools within two years. The same applies to the insights we can now gain from the digital laboratory around the Drillingsberichte.’

"My intention with preserving the children's messages is that one day they can be published as a memento of us and the children, so that people can enjoy them and our memory is preserved, we have not lived in vain." (Felix Oestreicher, Amsterdam, 17 February 1942)

The online Special Collection Drillingsberichte will be officially launched on 19 April 2022 during a closed meeting. The digitisation of the Drillingsberichte (1937-1943) and additional material was realised by Paul Sars and Sabine Jentges, in cooperation with Claudia Daiber, with assistants Christina Borchert, Marko Gorupec, Jorien Hollaar and Karlijn Smit, and with Ruud van den Heuvel of Information and Library Services.

Go to the collection
Go to education material
Delen