What began in 2020 as an idea over a cup of coffee has steadily grown into a unique Wall Museum throughout Nijmegen's city centre. This year, three more murals will be added as part of the Waalpaintings project, an initiative of Radboud University to make Nijmegen's history visible again through street art.

Nijmegen in Revolt, Centre of Europe, The Princess from the East and The Bombardment. If these don't mean anything to you, you should take a stroll through the inner city of Nijmegen and pay attention to the walls, because in the past two years these historical moments and figures of Nijmegen have been made visible again through street art. This project is called Waalpaintings (the ‘Waal’ being the river in Nijmegen) and is an initiative of Radboud historians Erika Manders and Dennis Jussen. Three new paintings are planned for this year: firstly a mural about the Roman city near the Nieuwe Marktstraat. Secondly, paintings on the acquisition of city rights in 1230 by King Henry (VII) and the pledging of the city to Otto II of Gelre are planned near Plein 44, and thirdly, there will be a mural on the Nijmegen Four Days Marches on a wall in the Molenstraat.

Waalpainting: the oldest city in the Netherlands

On 25 April, an interesting group of people gathered in the stately Heyendael House (Radboud campus) to discuss the mural about the Roman city: two representatives of the Nijmegen city council, three historians from Radboud University and four artists. Subject of the meeting: the first design for a new mural about the Roman city in the 1st and 2nd centuries, which is largely funded by the Action Plan for the Inner City and the Verleden Verbeeld (‘past portrayed’) programme of the Nijmegen city council. Less than two weeks later, the work of art has already been realised, on the side wall of the staircase under the Snelbinder near the Nieuwe Marktstraat. Dennis Jussen, the co-initiator of Waalpaintings, says: 'When you stand in front of the wall, you are literally looking in the direction of where the Roman city was.’

Thanks to its favourable location, Nijmegen already became an important centre in the north of the Roman Empire before the start of the first era. The Romans built the settlement Oppidum Batavorum (city for the Batavians) here. In 69 AD the Batavian revolt against the Romans broke out. However, the Batavians were defeated by Roman troops and therefore set fire to Oppidum Batavorum before they left. When peace was restored, the city was not rebuilt on the same spot, but two kilometres to the west. Around 100 AD, Emperor Trajan granted this main town market rights and the name Ulpia Noviomagus (Noviomagus literally means 'New Market'). (Source: House of the history of Nijmegen) 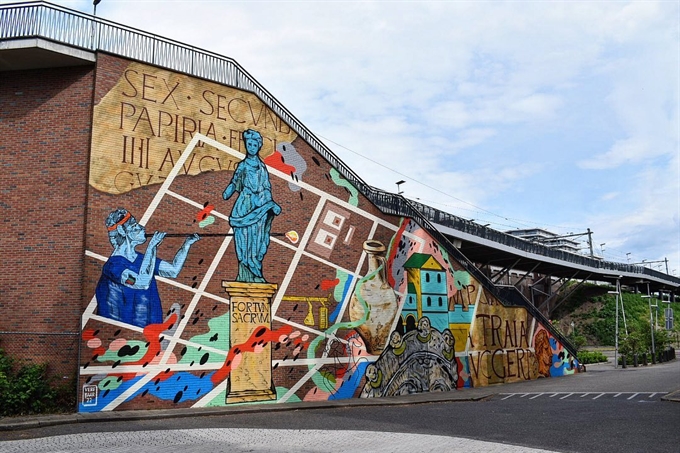 Artistic freedom of the four artists

Remco Visser, Naamloozz (Kenneth Letsoin), Barend Beer and Martinus Papilaja - all part of the art collective Verfbaar - took care of the painting of the oldest city in the Netherlands. As with all Waalpaintings, historical sources had to be the basis for this Waalpainting. Jussen, together with the four artists, therefore visited Museum Het Valkhof, where he provided information and explanations about the Roman collection, but where they could also find inspiration by looking for example at style and use of colour. Jussen: 'The artists made an interpretation of the story of the Roman city with as much historical accuracy as possible. But they were also given artistic freedom to keep this translation of history interesting for the general public.'

Together, the four artists determined the elements they wanted to see reflected in the design. For example, they incorporated text into the painting, which is based on the pieces of stone with engraved text that they saw in the museum. Remco Visser: ‘We incorporated a little wink with the word 'sex'. That refers to the streetwalkers' district on Nieuwe Marktstraat.’

Cool elements to tell about history

A prominent place is taken by the image of a glassblower. ‘Historically, this is a very good choice', says Jussen. ‘It shows that the Romans were already able to make glass. A lot of people don't know that.’ Of course, the Roman mask that was found during a dredging expedition in the river Waal at the beginning of the 20th century will also be painted. Professor of Nijmegen history Stephan Mols, says: 'The individual objects - such as the vase - are also well chosen, as they all come from one grave that was found during an excavation in Nijmegen in 1981.’

The first design lacked a reference to the Roman Emperor Trajan, which Manders and Jussen were keen to include. Jussen: 'The city received market rights from Trajan around 100 AD. That is a nice element to add, because it also fits in with the claim of Nijmegen being the oldest city in the Netherlands: we have had market rights since the year 100.’ Visser and consort complied with the request: Trajan has now been incorporated into the painting in both text and image. Erika Manders: 'The mural is exactly what we want to achieve with Waalpaintings. At first glance, there's a lot to see and learn, and there are enough elements to go into more detail on our website.’ 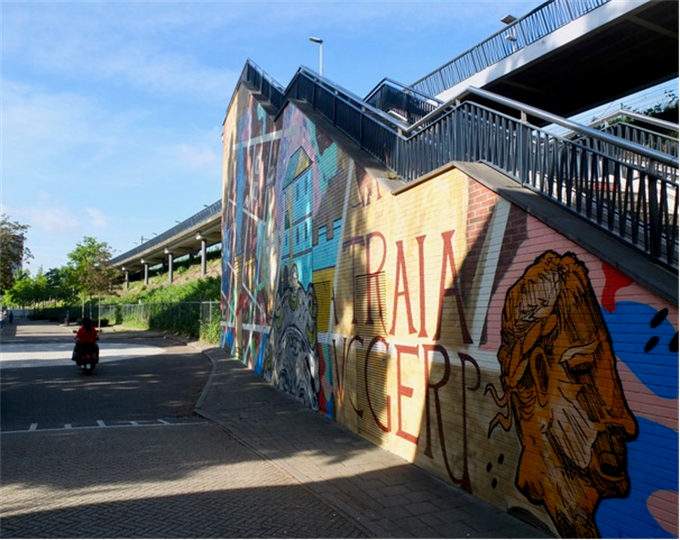 QR codes
In March, information boards were placed at the four Waalpaintings that had already been completed. The boards contain a short description of the historical story in Dutch, English and German. The artist(s) and sponsor(s) are also mentioned. There is a QR code at the bottom. Scanning this code takes you to the Waalpaintings website. There you will find more information about the historical story and the artistic process behind the mural.

While the paint of the mural on the Roman city has barely dried, the plans for a mural on King Henry (VII) and Count Otto II are also being concretised.

Three hundred years after the collapse of the Roman Empire, the Frankish king Charlemagne established his Western European empire. Charles had palaces built in various places in his empire, including Nijmegen. Nijmegen and the rest of what is now the Netherlands eventually came under the authority of the kings of the East Frankish empire, which would eventually be called the 'German' or 'Holy Roman' empire. At the end of the twelfth century Nijmegen started to show some more urban characteristics. Nijmegen gained an official urban status in 1230, when the German king Henry (VII) decided to grant city rights to the inhabitants. In 1247 Count William II of Holland was elected king, but he was in dire need of money. Therefore, he borrowed 10,000 silver marks from Count Otto II of Gelre. William II used the city of Nijmegen as collateral. The loan was never repaid, so that from 1247 Nijmegen and the district of Nijmegen belonged to the county of Gelre. (Source: House of Nijmegen History)

Henry VII falls of this horse

Artist Sander Dolstra took King Henry (VII) and Count Otto II as inspiration for the two murals that will be painted in the Hendrikhof passage at Plein 44 in Nijmegen. The designs are already ready.

On one side of the wall will appear a painting of Henry (VII) looking terrified as he falls off his horse to his death. On the horse's chest will be the weapon of Nijmegen, which the city was allowed to use after it received city rights from Henry. ‘Around it falcons fly, symbolising falconry, which in the Middle Ages was an exclusive sport for the nobility', says Dolstra. The wall of the tunnel also contains a number of barred windows. That is perfect: Henry went on horseback from prison to prison. As a representation of the city rights, Dolstra incorporated a plain piece of paper with 'city rights' on it into the design. Manders and Jussen will dig into the archives for historical accuracy. Jussen: 'I don't think we have the original city rights document, but we do have one from much later in which these rights are confirmed once again.’ 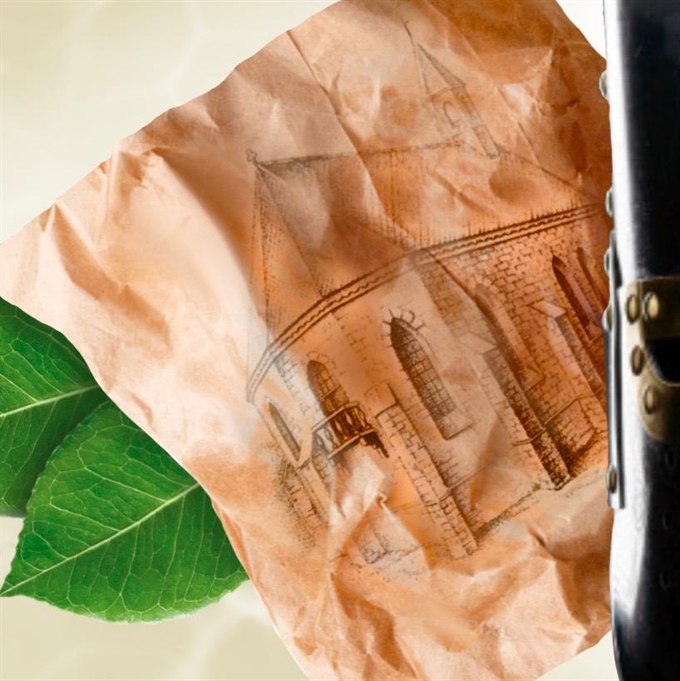 Teaser for the Waalpainting of Sander Dolstra

The other side of the tunnel is planned to be more abstract and will become a collage of objects referring to Otto II. A robust iron helmet will be displayed in the middle. ‘We don't actually know exactly what Otto looked like,' says Dolstra. ‘I was struggling a bit with that. I read about Otto that he fought a lot of battles. That is why I thought it would be nice to keep him a little anonymous and to use a helmet.’ Dolstra also incorporates the St Stevenskerk, a reference to Nijmegen as collateral, the city wall and a horse's foot in the painting (Otto had a club foot and was nicknamed 'horse's foot'). Jussen: 'This Waalpainting will be very nice. The important elements - the person, the story, city rights and the weapon of Nijmegen - are all there to tell the story.’

You can help with the Waalpaintings

The painting of the Nijmegen rulers is expected to start next week (week 21). Jussen and Manders are also working hard to create the Waalpainting about the Nijmegen Four Days Marches this year. You can read more about the painting here and you can also donate to make the painting possible.