Promotion film of the database Stalla

This promotion film was made by Christel Theunissen.

Since 2005, a database of choir stalls and misericords in Western Europe has been developed.

Choir stalls are part of the fixed church furniture in medieval monasteries and collegiate churches and were made in the period from 1150 to 1550 throughout Western Europe. The choir stalls are constructed from one or two rows of wooden seats, placed on the north and south side of the choir and possibly also on the west side.  The folding sessions of the seats on the bottom have console-like support, called a misericord. This word is derived from the Latin word misericordia that means mercy. During the periods in which canons and monks had to stand the misericord offered support. Parts of the choir banks, such as the misericords, are frequently decorated with carvings. Mainly religious scenes are to be found on the cheeks. This is in contrast to the carving of the misericords and the buttons where the profane world dominated with displays of fantasy creatures, human types, animals, proverbs and fables. Situated in the centre of the religious world the carvings give an idea of the way of thinking and acting in the daily life of in the Middle Ages. The CKD has several collections of images - the collection J. Verspaandonk, the collection Muck and the collection Van Aalst. 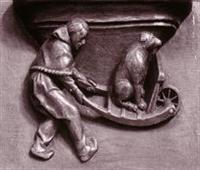