Felix Oestreicher writes letters about the life of his 'triplets' and the family before and during the Second World War. The development and upbringing of his daughters, the twins Helli and Maria (1936) and their big sister Beate (1934), are central themes in his writing. He began writing in April 1937, when the family still lived in Karlsbad. Fleeing from the approaching war, the family moved to the Netherlands in 1938 and within the Netherlands they also moved several times. The family did everything they could to escape the war and emigrate outside Europe. This did not succeed, however, and on 1 November 1943 the family was arrested by the occupying forces.

Scans of Felix Oestreicher's original letters, as well as the transcriptions, have been placed on the Special Collections platform of Radboud University as a digital collection. Our aim is to bring together researchers from different disciplines - such as linguistics, pedagogy and history - in a research community revolving around this digital collection.

Interested? Want to know more? Any ideas? Get in touch. 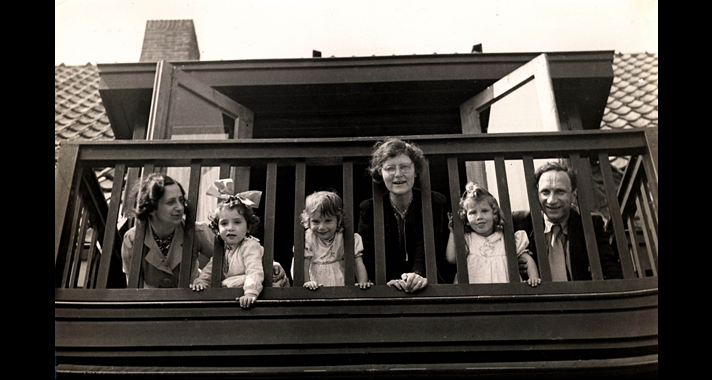 The Oestreicher family in Katwijk, the Netherlands (1940). From left to right: Lisbeth, Beate, Helli, Gerda, Maria and Felix.

Unless otherwise stated, the photographs on this website are the property of Maria Austria/MAI.