Reduction of methane emissions from lakes possible with new approach

Lakes and other freshwater systems emit large quantities of methane, which is the second most important greenhouse gas worldwide after CO2. Dredging and the use of Phoslock (a phosphate-binding clay particle) can reduce these lake emissions by over 50%. This is the conclusion of a study by Radboud University researchers, published today in Science of The Total Environment. 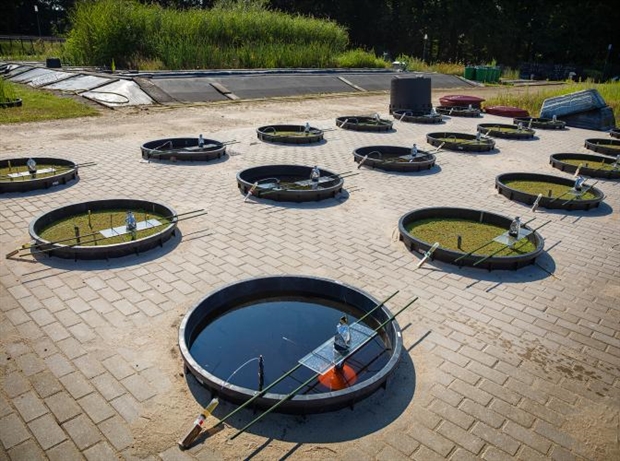 The study used a system of sixteen testing ponds: some of the ponds were dredged, some were treated with Phoslock, and in the last group, both techniques were used. “Dredging sediment from the ponds’ bottom reduced methane emissions by approximately 52%,” says author and Aquatic Ecologist Tom Nijman. “In the ponds where we used Phoslock, emissions were even reduced by 74%.”

Both methods therefore appear to dramatically reduce emissions. Nijman: “Phoslock leads to less phosphate in water, which in turn reduces the number of floating plants. Invasive plant species such as Azolla (also known as water fern) grow less fast with Phoslock, resulting in less methane being produced in the water. Dredging also allows us to remove organic material from the bottom, i.e. the carbon that produces methane. Our study shows that both methods reduce eutrophication in a lake, thereby also reducing emissions.”

Prevention is better than a cure

The researchers say that it is a little premature at this point to extend this approach to as many lakes as possible. Nijman: “These experiments first have to be repeated on a large scale. The first results are promising, but we want to measure the effect in more locations and over a longer period of time to see whether the positive effects lasts.”

In addition, this approach is not suitable for every situation, it is too expensive for that, as Nijman shows with a simple calculation. “An approach based on the use of Phoslock can easily be six to ten times more expensive than an approach that focuses on the environment surrounding the lake. This is not always possible in the Netherlands, think of lakes that are surrounded by trees or agricultural land, in some cases with little to no water flowing through. In such places you cannot simply overhaul the entire environment, in which case it might be useful to use dredging or Phoslock. But in places where the environment can be adjusted, the latter is always preferable. Prevention is still better than a cure.”