Martijn Agterberg; scientist in a duel with mother nature

Martijn Agterberg investigates the behaviour of bumblebees
in a mobile laboratory next to his house. He
expects to use the information to improve the design
of human hearing implants. However, the bees continue
to outsmart him, despite his best efforts.
Agterberg has learned to embrace failure graciously.
Sometimes, a failed scientific experiment will lead to
something even more beautiful. For months, working
in the mobile laboratory, he tried to manipulate bumblebees’
behaviour and landing accuracy. In a Pavlovlike
experiment, he aimed to teach the insects to fly
towards a reward – glucose in this instance – inside
the mobile lab.
Unfortunately, the force of nature overpowered his
artificial reward. The bumblebees wanted only one
thing: to get out and search for flowers. The fact that
he was not able to manipulate them confirmed the
creatures’ intelligence. ‘Although it was disappointing
in the beginning, this is a fact that I learned to love
later on,’ Agterberg said.

ON A SOUND MISSION
He’s also studying the movement of the bumblebees’
antennas. Halfway along their antennas, they have a
collection of sensory cells called the “Johnston’s
organ”, which acts as the bees’ ears. The bees can
move their ‘ears’ towards and away from each other.
The hypothesis is that bees can localise sounds
because they can move their ears. Should Agterberg’s
theories prove accurate, then the goal
will be to build a biological mechanism (a directional
sensor) into hearing implants. Despite all the hurdles
he’s faced, this scientist has not given up and continues
his study using several research setups.
The mobile lab consists of a plateau for the commercial
hive and sensitive cameras that can capture highfrequency
wing movements. It also has high-quality
music boxes that can produce low frequencies driven
by custom-made software.
At its peak, about 500 bumblebees lived in the lab. The
hive is as big as a fish stall, so Agterberg had to acquire
a special license to drive the lab to his house. ‘That is
not the only sacrifice I made. I also got stung on my
foot. It got very, very swollen,’ he said. Agterberg added
with a big smile, ‘But I don’t blame the bees, because I
made the mistake of going into the lab wearing
wooden clogs.’ 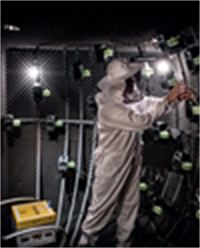