The auto-analyzers (3 Bran & Luebbe systems and 2 Seal Model III systems; continuous analysis) are utilized to determine the composition of water and soil samples in biogeochemical-ecological research. In order to analyze the concentration of NH4, NO3, NO2, PO4, Cl. The indicator product is measured by colorimetric methods. The parameters Na and K are measured with a Sherwood 420 flame-photometer.

Some of the devices used for above-mentioned analyses at the GI belong to the spin-off company B-ware, while others belong to the GI department itself. The cooperation between Radboud University and this spin-off is reflected in the personnel staff: Sebastian Krosse (B-ware) is detached as chemical analyst at the GI and Paul van der Ven (GI) is the responsible analyst for element analysis at the GI department.

The method of Murphy en Riley is routinely applied. A reaction between ortho-phosphates and molybdate, with antimony potassium tartrate as catalyst, is followed by reduction with ascorbic acid at a pH <1. As a result a blue component is produced, which can be measured at 880 nm. It is also possible to adapt the method for measurements of "Olsen" soil extracts to sea and brackish water samples.

The ammonium concentration in fresh and sea water is determined by a method known as the Berthelot reaction. A blue-greenish complex is formed which can be measured at 660 nm. A complexing agent is used to virtually eliminate the precipitation of calcium and magnesium hydroxides. Sodium nitroprusside is used to enhance the sensitivity.

In this automated procedure samples containing nitrate are lead through a copper- cadmium coil at pH 7.5 and form nitrite by reduction. The total nitrite, that is the amount formed by reduction of nitrate plus any nitrite already present in the original sample, react under acidic conditions with sulfanilamide to form a diazo compound that then couples with N-1 - naphthylethylenediamine dihydrochloride (NEDD). This coupling forms a reddish-purple azo dye that can be detected between 520 - 560 nm.

To determine the original concentration of nitrite in the untreated sample, the copper-cadmium coil is set as non-active during analysis.

The method is based on the nitrate determination in Standard Methods and in the DIN / ISO Standards for automatic nitrate measurements.

In surface water normally encountered in surveillance studies, the concentration of oxidizing or reducing agents and interfering metal ions are well below the limits causing interferences. However, when metal ions are present in sufficient concentration, they may produce a (false) positive error, i.e. divalent mercury and divalent copper may form colored complex ions having adsorption bands in the same spectral region as the color indicator.

Another problem is encountered in samples with a significant amount of sulfate or sulfide. These components may interfere with the performance of the copper-cadmium column. Therefore, such samples should be pre-treated before analysis.

The sample is mixed with an internal reference(lithium nitrate) of fixed determined concentration This product is nebulized and enriched with a propane-air mixture. This final mixture is burned, giving rise to the typical emission lines for sodium, potassium and lithium. The values of the emission signal of sodium and potassium ions are compared with the intensity of the emission generated by the lithium ions, in order to compensate for fluctuations in flame temperature, flow rate and chemical interferences. 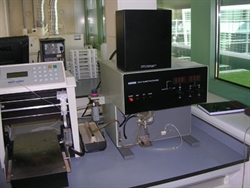