MALDI-TOF MS is the acronym for Matrix-Assisted Laser Desorption - Ionisation-Time of Flight Mass Spectrometry.  This technique is used to identify biomolecules, among which polypeptide/proteins in particular.  The ionization of the biomolecule  required for their seperation in the mass spectrometer. However, under standard conditions fragmentation of the molecule is a major problem, e.g. protein degrade into smaller peptide fragments. The method developed by Karas and Hillenkamp, called MALDI, consists of pre-coupling the biomolecule to a UV-light absorbing matrix, which will absorb most of the energy upon irridiation with the nanosecond laser pulse,  and thus prevent damage like fragmentation of the biomolecule, but will still allow the transformation of the sample molecules into ionized gas.

This MALDI-TOF is officially a GI instrument, but it is located at and managed by the Department of Microbiology 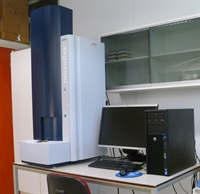