Researchers in Svalbard: 'Landscape has changed beyond recognition' 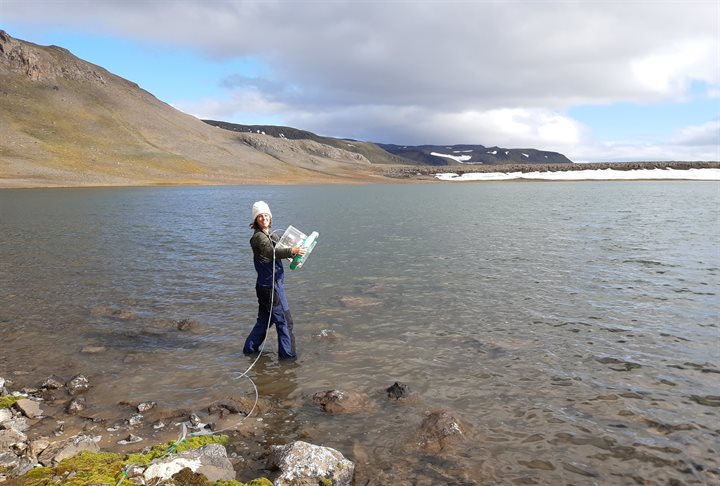 In July, a ship full of scientists left for Svalbard, an archipelago in the Arctic, for research. Aquatic microbiologist Annelies Veraart of Radboud University was one of the scientists on board for the inspiring and confrontational expedition. 'Fewer and fewer polar bears find a place on the melting pack ice.'

Nowhere global warming is happening faster than in the Arctic. Melting glaciers, thawing permafrost and shrinking pack ice are the order of the day there. Veraart was able to observe the melting with her own eyes last month. ‘It is wonderful to be a guest in this landscape full of birds, glaciers and polar bears, but to see the ice melt before your eyes, with temperatures of 14 degrees, is very depressing.’

Veraart does research on microorganisms in aquatic soil, including those that help reduce greenhouse gasses. 'One of those greenhouse gasses is methane. This is stored in many soils and when it is released the greenhouse effect is about thirty times stronger than for CO2.' Because of global warming, methane is being released more and more frequently and these emissions only stimulate global warming more. 'It creates a self-reinforcing spiral.'

Fortunately, there are so-called methanotrophic bacteria, organisms that break down methane and thus act as a natural filter. ‘Particularly in the rapidly warming Arctic region, these bacteria can play a crucial role,' says Veraart. Methane is also stored in the ice at the North Pole and as soon as it melts it can significantly increase emissions.

Veraart performed measurements in lakes and pools of meltwater in Svalbard. 'In the six lakes the methane emission was slightly lower than expected, but in the two pools with meltwater the emission was forty times higher than in the lakes.' In addition to the measurements, Veraart took samples of the aquatic soil to gain insight into the microorganisms present. The extent to which there are methanotrophic bacteria in the soil remains to be seen. ‘The samples are still frozen on board the ship. As of September, I will be able to study them.’

For Veraart and her colleagues, getting usable data was not easy. 'Due to fog, waves and, above all, lots of polar bears on land, we were forced to stay on the boat for five days.' The extreme conditions are also partly due to the changing Polar climate. ‘The melting of the pack ice means that fewer and fewer polar bears can find a home there, leaving more and more bears behind on land. Scientists who have done research here before said the landscape has changed beyond recognition.'

The days on the boat were filled with symposia. 'Every day other scientists told us about their research. The contact with scientists from other disciplines was very inspiring anyway. Hearing from behavioral scientists and sociologists or getting help with your research from a toxicologist and a seal researcher also made this expedition very special.'

Veraart does not dare say whether the expedition will have a sequel. ‘I would like to go back in five years, but I don't know if that is feasible. The journey itself is already a burden on the climate, but I also fear that the conditions in Svalbard will only become more extreme. It remains to be seen whether safe research is possible there.’