The vestibular sled is used to study sensorimotor integration during passive self-motion. It consists of a chair mounted on rails and powered by a linear motor that allows precise motion of subjects in order to stimulate the vestibular system. Also active self-motion can be investigated with the sled by granting control of the sled motion to the participant using a slider or joystick. At the same time visual stimuli can be presented by means of (chair mounted) LEDs, a 3D screen, a touch screen, or an OLED screen. An Optotrak infra-red motion capturing system is available to record (free) reaching or other movements of the subject. Furthermore an Eyelink 1000 Plus eye tracking system can be mounted on the chair, as well as headphones for auditory stimulation and a joystick, slider, or touch screen for manual responses. The vestibular sled can also be used in combination with EEG or TMS in order to probe neural correlates of sensorimotor integration. We use this set up to study how linear motion is perceived and how self-motion affects spatially-guided motor behavior. For example, what happens when we try to point at a remembered location in space after we have been moved? Or how does self-motion affect goal-directed decision making? The vestibular sled is sited at the Donders Centre for Cognition.

The 3BOT is a three-dimensional robotic manipulandum that acts on a handle grasped by a participant to measure movements of and/or exert forces onto this end-effector in 2D or 3D. A screen mounted horizontally in the plane of movement is used to provide a virtual reality environment for stimulus presentation. Headphones are used for auditory stimulation. The screen can be used in combination with a pair of 3D glasses or an Oculus Rift can be used to present stimuli and measure or manipulate movements in 3D. In order to manipulate proprioception of the arm, a single or a pair of vibrators can be attached to the arm muscle(s). Muscle activity (EMG) can be measured using wireless surface electrodes (Trigno sensors), for example to investigate stretch reflexes. The 3BOT can also be using in combination with TMS or GVS. This setup is used to investigate motor adaptation and its generalization, the interaction between vision and proprioception in motor control, the role of movement variability in motor planning and execution and the role of the motor system in decision making. The 3BOT is sited at the Donders Centre for Cognition.

An Eyelink II and an Eyelink 1000 Plus Desktop Mount are available to track (binocular) eye movements, either head-supported or head-free, using infrared light in a dark room. Auditory stimuli can be presented using headphones. Visual stimuli can be presented using LEDs, an LCD, CRT, or an OLED screen. This lab is used to study spatial perception and the role of the motor system in decision making. EEG, TMS and GVS can all be associated with these setups. The vision laboratory is sited at the Donders Centre for Cognition.

The lab has also equipment at its disposal to record large volumes of  kinematic and neural data in real-world situations. Kinematic data about body and head motion can be recorded at 150 Hz sampling rate using inertial measurement units (IMU), each consisting of a 3D accelerometer, a 3D magnetometer, and a 3D gyroscope (Awinda 3DOF Motion Trackers, Xsens technologies, The Netherlands). Wearable EMG can be recorded (Trigno system). Neural data can be recorded using wearable EEG.

The vestibular system is important to detect the direction of gravity and movement of the own body. It consists of two subsystems: the semicircular canals which detect rotational acceleration and the otolith organs which respond to linear acceleration resulting from translation or gravity. For experiments on human spatial orientation we use a vestibular chair which can be freely rotated in three directions. The vestibular chair is sited at the Donders Centre for Neuroscience (More information can be found here).

Functional Magnetic Resonance Imaging is a neuroimaging technique based on the magnetic properties of atomic nuclei in the human body. In particular, fMRI can be used to detect changes in the amount of oxygen delivered to different brain regions (BOLD signal), which reflects neural activity. Because it is non-invasive, has good spatial resolution and measurements are relatively easy to conduct, fMRI has become the most popular method to study brain activity in humans. In our lab, we make use of two scanners of 1.5 and 3 Tesla field strength, which are both sited at the Donders Centre for Cognitive Neuroimaging. Both scanners are equipped for auditory and visual stimulation as well as response feedback and synchronization. We use FMRI to study the neural mechanisms of sensorimotor integration in saccade and reaching tasks. 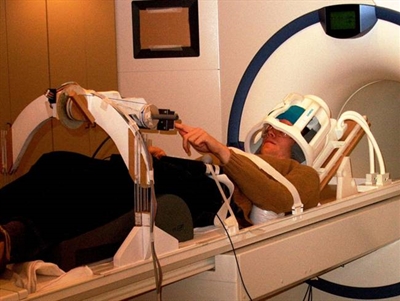 Manetoencephalography is a neuroimaging technique which measures the magnetic fields arising from electrical activity in the brain. When a number of neurons receive synaptic input to their dendrites at the same time, the electric potential (EPSP) creates a magnetic field that can be measured outside the scull. However, since the magnetic fields are very small - approximately one billionth of the earth's magnetic field - specific sensors (SQUIDS) and a magnetically shielded room are required for an MEG system. In our experiments, we use a 275-channel whole head MEG system, which is housed in a magnetically shielded room at the Donders Centre for Cognitive Neuroimaging. Additionally, MEG compatible equipment for visual, auditory and tactile stimulation is available. Among others we use this set up to study the role of oscillatory activity in the coding of spatial representations of eye and hand actions.