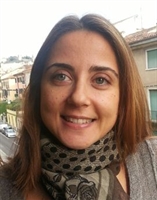 Sara Fabbri is a postdoctoral researcher in the Sensorimotor Lab of Pieter Medendorp. Before that, she worked as a postdoctoral researcher in the Neuroimaging of Action and Perception Lab of Jody Culham in London, Canada. Sara obtained her PhD in Cognitive and Brain Sciences at the Center Mind/Brain of the University of Trento (Italy), under the supervision of Alfonso Caramazza and Angelika Lingnau.

Sara is interested in understanding how the human brain controls our actions. Interacting with objects is a fundamental characteristic of human behavior. We unscrew lids from jars, catch balls, or play the piano. By measuring the relation between properties of the target object (e.g. spatial location and object shape) and the corresponding motor act (e.g. arm trajectory and hand configuration), Sara aims to understand the neuronal and behavioral bases of our ability to interact with objects in space. During her PhD, Sara used functional magnetic resonance imaging (fMRI) to identify the network of regions in the human brain responsible for the specific direction and amplitude of reaching movements. During her postdoc, Sara is measuring arm kinematics and brain activity during interactions with objects in the real world, and also in virtual environments, increasingly more common with the development of touch screen devices (such as smartphones and tablets).

In 2014 Sara obtained the Excellence Radboud Fellowship from Radboud University for her project on the neurocomputational basis of touch screen interactions.