Emergence of cells from coacervates

How can a mixture of molecules spontaneously assemble into an organized cell? And how can a passive protocellular droplet become an active, growing, dividing and moving cell that exhibits life-like behavior? Our research into coacervates aims to help answer these questions using experiments at the interface of chemistry, physics and synthetic biology.

The earliest cells could be very different from today’s living cells, but cells must have certain basic properties and functionality: being effective compartments, the ability to grow and divide, controlled transport in and out and possibly active motion. In search of ways to make primitive cells that exhibit one or more of these properties we are currently investigating a range of different coacervate- and liposome-based model systems.

Coacervates are water-based droplets that are densely packed with multivalent molecules, such as proteins, polymers and nucleotides. Because they are phase separated from the surrounding solution they do not need a membrane for stability. Many coacervates also have a natural tendency to take up other molecules. These properties make them logical candidates for the first cell-like objects that formed on the early earth.

We investigate how coacervates can be triggered into activity, ranging from controlled growth and shape change to self-sustained motion and division. We work on a range of coacervate model systems made from intrinsically disordered proteins, peptides, amphiphiles, nucleotides and natural polymers using microfluidics. The group also studies if natural selection and molecular evolution between different coacervate species could result from the natural tendency of coacervates to take up other molecules. 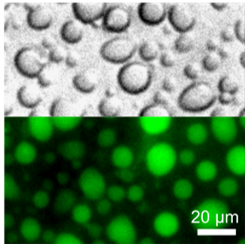 In addition to the fundamental interest to develop a physico-chemical understanding of cells and the cytoplasm, we are interested in developing specific coacervate-based systems into new vehicles for targeted delivery into living cells and as chemical baits that can scavenge viruses and other pathogens. Coacervates can show high affinity for living cells and they can be loaded with specific receptors that enable effectively delivery into those cells. Other coacervates may be used to scavenge viruses and bacteria and prevent them from infecting other cells. 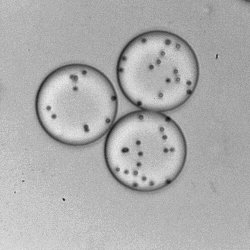 A key challenge in the creation of synthetic tissues and soft materials based on connected aqueous droplets is to keep intercellular connections intact and stable in a surrounding aqueous environment. We investigate how crosslinked shells formed upon complexation around water-in-water droplets can be connected together and assembled into networks of communicating compartments. Going one step further, we aim to equip these shells with channels that will enable selective transport from one compartment to the next.

Synthetic cells on the move

Many living cells have ways to move around, both on surfaces and in solution. We combine chemical reactions, selective transport across the interface and adaptive wettability with different synthetic cell platforms to develop new model systems of active cells that are able to move independently in response to external stimuli on either surfaces or in solution.