There are two prominent methods to acquire spin information utilizing STM methods. The first is based on spin-polarized STM, in which a magnetic probe is utilized. The overall measured current has a component related to the projected magnetization of the surface onto the magnetization of the tip. Secondly, it is possible to utilize inelastic tunneling, to locally excite spin excitations, for example of individual atoms.

We have recently developed a world-wide unique combination of spin-polarized scanning tunneling microscopy and magnetic exchange force microscopy (SPEX) that can independently probe the geometric, electronics and magnetic structure and can be applied on conducting and insulating surfaces. We use SPEX for high-resolution magnetic imaging as well as for quantifying the atomic-scale magnetic exchange forces of non-collinear magnetic textures.

Left: sketch of the light emission detection from a low-temperature STM. Right: Photograph of the cryogenic part of the setup (unpublished).

STM-induced light emission is based on the principle that electrons tunnel inelastically between tip and sample and locally excite the system (e.g. a single molecule), which can subsequently decay by emitting a photon. The light is collected in situ by a lens mounted inside the cryogenic STM, guided out of the ultrahigh vacuum system, and eventually analyzed ex situ via a grid spectrometer with an LN2-cooled CCD detector. Light intensities down to just a few photons per second can thus be detected. 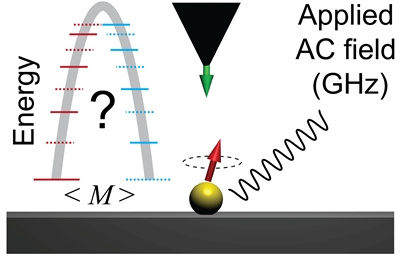 Schematic of gaining time resolution in STM, by applying GHz pulses to probe pump-probe or resonance dynamics of individual spins on surfaces

There are various methods to gain time-resolution in STM. Two prominent ways involve utilizing electrical excitation, via microwave waveforms. For example, pump-probe and spin resonance methods can be applied to characterize the various lifetimes of individual atoms on surfaces. 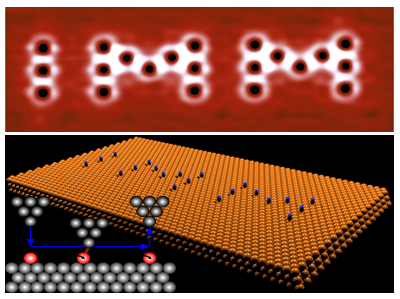 STM image (top) and 3D model (bottom) of the institute letters, assembled by manipulation of 21 carbon monoxide molecules on A Cu(111) surface. The font size corresponds to 0.000006 pt (unpublished).

The STM can also be used to move atoms (or molecules) with atomic-scale precision. By bringing the tip very close to the atom, an attractive force between them allows for, e.g., dragging the atom along with subsequent lateral movement of the tip. In case of lateral manipulation of atoms or molecules, the tip is first lowered to the adsorbate via reduction of the tunneling resistance, and then moved laterally along the surface.