Goal: The goal of our research is to study the dynamic competition between different fundamental interactions in both molecular and magnetic materials, and to explore and control excitations, functionalities and the new phases that emerge from them.

Methodology
Continuous development and improvements of experimental and theoretical techniques play a crucial role in making this research successful. We have developed an extensive toolbox of pump-probe techniques based on femtosecond solid state lasers for magneto-optical and nonlinear optical spectroscopy. Frequencies span the whole spectrum from the uv/visible (exploring electronic excitations) to the far-infrared/THz (to probe collective excitations like phonons and magnons), while temperatures can be varied from 4K to 1000K and magnetic fields up to 38Tesla. For atomic specific and spin selective Xray (XMCD) spectroscopy, we regularly use synchrotron facilities in Berlin and Zuerich and the Free Electron Laser facility in Stanford. To support and guide these developments, we have developed and applied advanced theoretical and computational (quantum) many-body methods, including phenomenological theory and classical atomistic spin dynamics simulations, dynamical mean-field theory, the angulon quasi-particle approach and most recently with a novel method inspired from machine learning (ULTRAFAST, https://scipost.org/10.21468/SciPostPhys.7.1.004).

1) Ultrafast Magnetism: Magnetism on the time and length scales of the exchange interaction

When a magnet is excited with a stimulus, like a femtosecond laser pulse, much shorter than the time of thermal equilibration in solids (~1-100 ps) and pertinent to the characteristic time of the exchange interaction, such an excitation brings the medium into a strongly non-equilibrium state. Here conventional descriptions of magnetic phenomena, that substantially rely on the adiabatic approximation, are no longer valid. 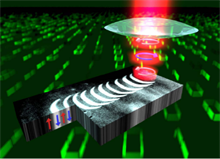 This has led to surprising discoveries such as the switching of magnetization by a single femtosecond laser pulse (Phys. Rev. Lett. 99 (2007); Science Breakthrough of the year 2007). Questions that arise are: How to describe the strongly nonlinear dynamics of a spin system so far from equilibrium? How does long range magnetic order emerge while the short range interactions themselves are evolving in time? These questions are not only of fundamental interest: future magnetic storage and possibly logic will depend on our knowledge of the fundamentals of ultrafast magnetism. We aim to answer these questions employing femtosecond time resolved optical pump-probe spectroscopy and microscopy, the high magnetic fields and THz radiation  from the HFML-FELIX facilities, as well as recent developments of a new generation of femtosecond X-ray and picosecond THz free electron lasers, together with new developments in theory and computational science. By a synergy of these novel, beyond state-of-the-art experimental and theoretical techniques, we try to initiate a breakthrough in the understanding of magnetism and magnetic phase transitions beyond the thermodynamic approximation.

Goal: To understand the physics of magnetism in the regime where the exchange interaction parameters are time-dependent and strongly non-local and to exploit this knowledge in engineered nanostructures to provide unique functionalities such as optical switching of magnetic domains at THz rates and the manipulation of topologically stable spin structures by optical or electrical fields.

Approach: To achieve these objectives we have combined the complimentary expertise and infrastructure of researchers from Nijmegen, Eindhoven and Twente. All team members have a strong track record and international reputation and network in the fields of ultrafast spin and magnetization dynamics, ab-initio calculations of nonlocal relaxation phenomena, first principles theory of magnetism and magnetization dynamics and atomic-scale engineering of magnetic nanostructures. The programme is organized in 6 strongly intertwined projects, each headed by 2 PI's. Interactions are bi-lateral, via skype and e-mail and via yearly consortium meetings. 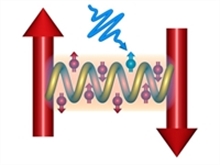 Concept of optical manipulation of the exchange interaction

The main objective of SPICE is to realize a novel integration platform that combines photonic, magnetic and electronic components. Its validity will be shown by a conceptually new spintronic-photonic memory chip demonstrator with 3 orders of magnitude higher write speed and 2 orders of magnitude lower energy consumption than state-of-the-art spintronic memory technologies. This enables, e.g., future petabit-per-second processor-memory bandwidths, required in a decade from now, and highly energy-efficient exascale datacenters with reduced carbon footprint. Such a versatile memory will result in so-called Universal Memory: one technology for all memory applications ranging from cache to storage. 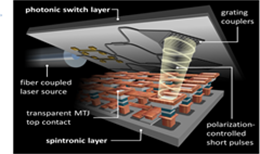 Concept of optically switchable MRAM structure as envisioned by SPICE

Data is the infrastructure of the future, but the energy consumption and heat production of modern data centers is a serious limitation to further increase their performance. This proposal envisions a sustainable and environmentally friendly future of data, by aiming at a fundamental breakthrough in the knowledge for increasing the energy efficiency of magnetic data storage and by cooling the surrounding infrastructure by magnetism as well. The main goal is to bypass fundamental efficiency limits of magnetic storage and magnetic cooling by understanding how to address the internal magnetic fields in magnetic materials, which can exceed externally applied magnetic fields by orders of magnitude and can be directly manipulated with laser pulses. To achieve this goal, highly advanced multi-scale computational schemes will be implemented and used for the simulation of magnetism under strongly nonequilibrium conditions.

It is well established that magnon dynamics in antiferromagnets can display genuine quantum phenomena such as squeezing of spin noise below the quantum limit and generation of magnon entanglement by ultrashort perturbation of the exchange interaction. However, so far this dynamics has not been studied with spatial resolution, limiting the understanding of the quantum aspects of this dynamics. Recently, we have shown that accurate studies of the real space-time dynamics of quantum magnonics in two dimensions is possible owing the the newly developed neural quantum states, which we implemented in our ULTRAFAST code. Beyond the capabilities of existing methods, we demonstrated that the spreading of quantum correlations and the dynamics of entanglement are qualitatively distinct from well- established results in one-dimensional systems. In main goal of this proposal is to study the dynamics in much larger two-dimensional spin systems. Exploiting the favorable quadratic dependence of CPU time on system size, we expect that systems with over 1000 quantum spins should be feasible.

The main goal of this research is to understand how the ultrafast charge and orbital dynamics of electrons can accelerate the dynamics of spins. To this end, a new theoretical framework will be developed in which, for the first time, the strongly correlated dynamics of charge, spin and orbital degrees of freedom in magnetic materials can be modeled.

Molecular materials allow for a flexible approach to design new functional materials with specific desirable properties. In collaboration with the Molecular Materials Departments of Paul Kouwer, the Synthetic Chemistry group of Jialiang Xu (University of Nanking) we are pursuing a Supramolecular approach to novel nonlinear optical materials, with well-defined architectures at (sub)wavelength scale that can be used for photonic applications. By gaining full control over the growth of the microstructures we aim to achieve distinct architecture dependent optical responses in both the linear and nonlinear optical regimes.

Molecular crystals also can display a large variety of solid to solid phase transitions that can be accompanied by drastic changes in their (optical) properties. We have recently discovered that the fluorenone derivative (4-DBpFO) shows a very strong shear deformation upon heating due to a structural phase transition, which makes it a  robust thermoelastic microactuator (Nature Comm. 2019). With this work we have close collaboration with the group of Herma Cuppen (Computational Chemistry) to study the properties of a new class of these so-called thermosalient crystals, that demonstrate spectacular mechanical responses after external triggers like heat or light.

Salient crystals are characterized by a thermally/optically/mechanically induced phase transition, accompanied by a sudden anisotropic lattice expansion during which stored mechanical strain is released, which leads to the observed sudden jumps, bending or other deformations. Such crystals, capable of rapid mechanical energy release, could be employed in practice for energy harvesting, tunable contact printing, mechanical actuation in artificial muscles, microfluidic valves and gates or mechanically tunable optical elements, and in switchable reflector elements for projective displays, among other things.

After a few decades of development, dozens of crystals have been demonstrated to be thermosalient materials, but the microscopic dynamic mechanism of thermosalient (jumping) behavior is still largely unknown. It is of great interest from both a scientific and application point of view to reveal the complete transition process down to the atomic level, to learn more about the stimulation mechanisms and in turn apply this insight into the design of new thermosalient materials.

mages of a typical macroscopic single crystal of 4-DBpFO, under UV light excitation before (left hand side) and after (right hand side) a structural phase transition (from Y. Duan et al, Nature Comm. 10, 2019) 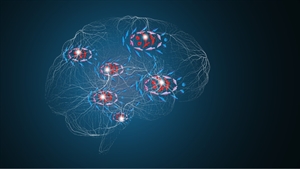 The explosive growth of digital data use and storage has led to an enormous rise in global energy consumption of Information and Communication Technology (ICT), which already stands at 7% of the world electricity consumption. The paradigmatic Moore's law, that has driven progress in semiconductor technology in the past decades, is reaching its limits and cannot solve this energy problem. Moreover, excessive power consumption has already prevented further increasing data-processing clock speeds for more than a decade, which is becoming an issue for the handling of large amounts of data. Therefore, there is an urgent need to develop new ICT approaches, based on new material design, concepts and architectures routed in fundamental science and technological innovations that will lead to drastic reductions in energy use. Recent progress in Artificial Intelligence (AI) has demonstrated the high potential of neural networks, but comprise software architectures implemented on top of rigidly inflexible hardware not optimized for neural functionality and requiring massive consumption of energy. We try to achieve these neuromorphic concepts in hardware and will utilize some of the most important neural network architectures as a basis, such as (deep) feed-forward networks (perceptrons), recurrent neural networks (Boltzmann machines) and recurrent dynamical systems (reservoir computing (RC)). We have recently achieved a first demonstration of supervised learning in a Co/Pt film, which exploits femtosecond control of artificial synaptic weights using a global feedback mechanism (APL, 2019) and are trying to scale this up for actual pattern recognition. Moreover, we investigate coherent and ultrafast optical control of nonlinear magnetic oscillations at the nanoscale to ultimately realize ultrafast nanoscopic oscillatory neuromorphic hardware operating at the least possible energy dissipation. 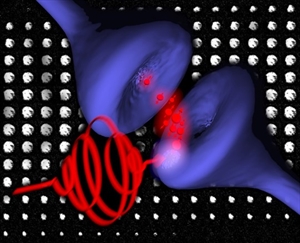 12M€ for research into "magic" 3D nanostructures for Theo Rasing, together with Rafal Dunin-Borkowski (projectcoördinator, FZ Jülich), Stefan Blügel (FZ Jülich) and Mathias Kläui (Johannes Gutenberg-University). The physicists will explore still largely-unknown nanoscale 3D magnetic structures, which show particle-like properties and whose existence has so far only been predicted theoretically. The grant is awarded for groundbreaking projects which, due to their complexity, cannot be carried out alone but only by a team. The researchers have been awarded 11.8 million euros over six years. 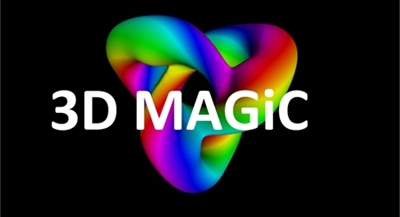 Over de past 150 years, many of the greatest questions in physics have addressed how particles can emerge in continuous fields. In this highly exploratory project, the researchers will open a window into the behaviour and control of some of the least explored and most puzzling objects in nanomagnetism: three-dimensional magnetic solitons (MSs). These textures are expected to move and interact in 3D in magnetic structures in a similar manner to ordinary particles. Experimental study of 3D MSs is nearly unexplored as a result of their small size and current lack of suitable characterization techniques.

In 3D-MAGiC, four research groups are brought together with expertise in theoretical descriptions of magnetism, device physics, magnetic characterization with high spatial and temporal resolution and manipulation of magnetic textures with light. With new methodologies, the researchers will gain new insights in the working mechanisms of 3D MSs, where particular attention will be paid to the manner in which 3D MSs can be controlled and manipulated dynamically. 3D MSs are foreseen to play the role of information carriers that can move freely in any spatial direction and to offer a key advance over conventional 2D magnetization textures. This project will provide guidelines for their use in promising applications, such as magnetic information storage and brain-inspired information processing systems.