An internship at our department is an excellent way to improve your knowledge in quantum mechanics and statistical mechanics. Projects can consist of a purely analytical work (doing calculations with pen and paper and/or Mathematica), purely a numerical work (coding in python or C++) or a combination of these two. Projects that focus on mathematical physics are also possible.

We have projects on a variety of topics that include superconductivity, spintronics and two-dimensional membranes. In each project you will learn and use a certain method to tackle a problem. These methods can be similar to what you know from your physics courses such as diagonalizing matrices and solving differential equations, but can also be something new such as constructing a neural network or using density functional theory.

Up to now, we have had both physics and science students. If you would like to know what projects have been done in the past, please have a look here.

Electrons are charged particles and they repel each other. Superconductivity is one of the most amazing quantum phenomena where electrons attract each other and form pairs called Cooper pairs. Inside a superconductor current flows without loss. Usually this happens below very low temperatures (Tc). Nevertheless, there is a class of superconductors called 'High Tc' is where this phenomenon can arise at very high temperatures, promising potential application for loss-less electric transport in our day to day life.

We should be able to use an established sophisticated many body theory to explore what is the glue for Cooper pairs in such 'High Tc' superconductors, and gain microscopic insight into the mechanism that can drive Tc higher.

Many interesting phenomena come from many-body effects in quantum systems.
Describing such systems, however, is a very challenging task because of a) very fast scaling of the Hilbert space dimension with system size, and b) the so called "sign problem". Recently, a new (and very promising) approach for tackling quantum many-body Hamiltonians has been introduced: Neural Quantum States (NQS). It is a numerical method combining concepts of Variational Monte Carlo with Machine Learning (and Deep Learning in particular).

We actively work on improving the NQS method as well as applying it to interesting physical systems. Depending on your interests, projects in both directions are possible.

Exact diagonalization (ED) is one of the oldest and most reliable numerical methods of quantum many-body physics. We write the Hamiltonian down as a huge matrix and explicitly solve the eigenvalue problem to get the ground state.

From there, various observables such as order parameters and correlation functions can be calculated to describe the system. By combining symmetries of the system with clever programming techniques systems of more than 40 spins can be treated (think diagonalizing a 10¹² by 10¹² matrix!).

Projects with focus on programming and high-performance computing or physics are both possible. For example, you could work on extending our ED code to support time evolution, or work on multi-node parallelism, or use the code to study phase transitions in quantum magnets (and many more).

Plasmons are collective electron oscillations, which are very susceptible to the environment in 2D. Layered heterostructures are thus an exciting playground for next-level plasmonics, but how exactly are plasmons tuned by the stacking order?

To figure this out, you should combine density functional theory, a computational modelling method to investigate the electronic structure of a many-body system, and model descriptions to gain material-realistic plasmonic spectra from the properties of the atoms, also known as first principles. 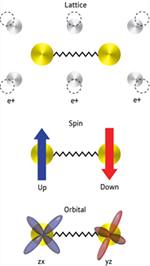 Superconductivity is the result of an interplay between attraction and repulsion of electrons yielding the famous Cooper pairs. While the attraction is routinely directly calculated from the properties of the atoms, the repulsion resulting from the Coulomb interaction is used as fitting parameter. How can we overcome this and calculate the repulsion?

To do so, you should use density functional theory, a computational modelling method to investigate the electronic structure of a many-body system, and the random phase approximation to calculate material-realistic Coulomb interactions and derive the effective Cooper pair repulsion from this.

Anti-ferromagnetic materials have a magnetic order that is hard to measure. But it can be used to store and process information on very short time scales. How efficient can we manipulate this magnetic order in antiferromagnets with an electric current?

To figure this out, you should numerically investigate & visualize the dynamics of the magnetic order in the presence of electric current.

Structural and thermodynamic properties of two-dimensional materials are crucially affected by thermal fluctuations which induce ripples and deformations in the crystal shape. Some of the recently discovered 2D materials present a spontaneous ferroelectric polarization. How does polarization affect structural and thermodynamic properties of a 2D crystal?

To understand this, you should derive a long-wavelength Hamiltonian for fluctuating crystalline membranes with permanent polarization and use statistical mechanics to describe thermally-induced ripples.