* Monty Python's Flying Circus is available on Netflix, or watch the trailer here. 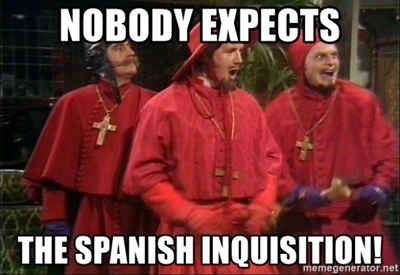 One of the most infamous representations of inquisitors involves torture by pillow, bad introductions, and the famous line, "Nobody expects the Spanish Inquisition!" It comes from the comedy group Monty Python and their sketch comedy show, Flying Circus. This ridiculous series of skits takes place in three parts over the course of an entire episode. Certainly, nobody expected the Spanish Inquisition, yet the skits are now known worldwide and even appear in one of the most recent forms of comedic expression, memes.

The skits themselves are funny in large part because of their absurdity, a common feature of Monty Python's humour. It all begins in Jarrow, England, during the year 1912. Two people are discussing how the treadle, a peddle used to work a machine, at a nearby mill has broken. Shortly into the conversation, the three inquisitors burst into the room and yell, "Nobody expects the Spanish Inquisition!" They try to introduce themselves multiple times. It never quite works out how they want, so they simply move on to "torturing" one of the people by tying a dish rack around her waist. The scene ends. Later in the episode, a similar situation somehow segues into another round of Spanish Inquisition. This time, however, they "torture" a guest by poking her with 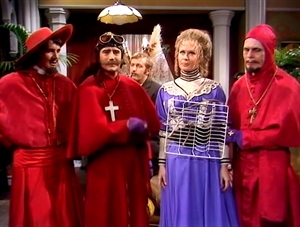 fluffy pillows. The third, and final, skit takes place in mid-century Britain and sees the three inquisitors desperately racing to reach a courthouse and proclaim the Inquisition's presence before the end credits start rolling.

Given how famous the skits are, it is important to inspect their accuracy and determine where these goofy inquisitors deviated from historical evidence. The silly portrayal ridicules the Catholic Church, making it easy to see even when watching casually. In fact, the skits themselves seem to care little about historical accuracy and more about pushing for cultural change. They feature fictional characters, set the skits in twentieth-century Britain, and portray the Catholic inquisitors as torturous zealots. The Pythons care less about historical accuracy and more about making statements.1 Due to this, it is safe to say that the "Spanish Inquisition" skits twist history to meet their needs.

When it comes to portraying the Spanish Inquisition, Flying Circus is surprisingly subtle. The inquisitors are obviously out of place, and they are subtly British. There is more to the portrayal than silly hats and moustaches. The three inquisitors all have names and those names provide their full identities. To look at the inquisitors' stories is to see a negative portrayal.

The leader, Cardinal Ximinez, is the only historically based inquisitor. Ximinez was a high-ranking Catholic leader from fifteenth-century Spain. He was also a very devout person. His religious intensity, along with his political and religious authority, forced the Spanish people to practice a very strict form of Christianity. Ultimately, he was intolerant, authoritarian, and his work hurt many people.

The second inquisitor is Cardinal Biggles, named after James Bigglesworth. Unlike Ximinez, Bigglesworth is a fictional character from British novels. He first appeared in 1932, right in between the two World Wars. Biggles was a fighter pilot, explorer, and adventure hero. He interacts with stereotypical characters from other cultures throughout the Bigglesworth series. While Biggles used to be a worthy role model, he has been revaluated as largely racist.2 He is not heroic, he is ignorant.

The last inquisitor, Cardinal Fang, is also fictional. He is based on the character "Mr. Fang" from the famous novel Oliver Twist.3 In the story, Mr. Fang is a judge who oversees Oliver's criminal trial. The judge is mean, short-tempered, and abuses his power. Rather than administering justice, Mr. Fang tries to pile abuse on the sickly young boy.

Flying Circus, as abstract and silly as it may seem, is deeply concerned with its cultural context. This is most apparent when looking at two factors: The Pythons' backgrounds and the vast cultural gap between their generation and those before. These factors inform the Flying Circus show and the Spanish Inquisition skits in particular.

The people behind Flying Circus were intelligent and passionate young comedians.4 Every single member of The Pythons had a university degree. This meant that they were highly educated, well-versed in history, and able to add nuance to their work. This combination meant they built jokes with surprising depth and thought. The "Spanish Inquisition" skits are a perfect example. They took a skit about the Spanish Inquisition and added unique, British literary figures. The Pythons were smart enough to interact with their own culture by adding little hints to their show.

Not only did The Pythons understand how their world changed, but they also built a direct connection between their context and their work. This connection sets the "Spanish Inquisition" skits apart from the other films in this project. The skits are about something out-of-place crashing into British life. Compare this to a film such as The Grand Inquisitor, and the difference becomes obvious. The Grand Inquisitor explores how religion controls people by using a completely Medieval setting. The "Spanish Inquisition" skits joke about previous British culture by comparing it to Medieval and Early Modern inquisitors. The Pythons set the skits in Britain and use British literary figures because they want the viewer to connect to the humour.

Finally, England has rejected the Catholic Church in favour of the Protestant Church since the reign of King James I. Prior to him, English rulers favoured one church or another. King James, however, settled England as a Protestant nation. This Protestant history, along with the fact that England never had a formal inquisition, means that the Pythons would likely have negatively viewed any form of inquisition.

The culture surrounding these skits is one of change. New waves of culture ushered in different ways of thinking and perceiving the world. The Pythons, being young and educated, were on the forefront of a culture that naturally struggled against previous generations' cultures.5 Furthermore, England itself has a long and storied history with Catholicism. As such, the Pythons seem naturally inclined to mock Catholic institutions.

Since Flying Circus is a comedy show, it makes sense that the main message is humour. If their long and popular career is any indication, The Pythons make people laugh all the time. There is more, however, than simple laughs. The inquisitors appear increasingly foolish (as opposed to authoritative) as they fail to root out devious behaviour. With this portrayal, the intended effect becomes clear – make the inquisitors look bad so that the joke will land.

Why, then, do the inquisitors (and by extension, "inquisition" as a whole) need to look bad for the skits to be funny? There are a few theories about what makes something funny and they always involve something having gone wrong. Superiority theory, for instance, says that another person's problems are funny because they remind us that we are in a better position. Incongruity theory, on the other hand, says that things are funny when said things do not meet our expectations. In this case, the thing having gone wrong is our very own set of expectations. No matter what it is, something must happen to a situation that breaks from the norm.

Regardless of which specific theory is most true, the fact remains that the inquisitors necessarily appear as something "wrong." After all, a scene in which a man informs a woman that the mill has broken down is unlikely to be particularly funny unless something goes wrong. That "wrong" element, as demonstrated, can be a variety of things. Yet without this element, the three skits would fail to make the viewer laugh.

By understanding that the three inquisitors play the part of "something wrong," the underlying message comes into focus. Namely, there is a strong message of disdain towards a combination of religion and the previous generations. The portrayal, along with the cultural context, stand as evidence. Since the overall portrayal of inquisition is incredibly negative, it mixes cultural figures with historical ones. Considering the cultural context is one of rapid change, it makes sense that there is an underlying critique of British history. The Pythons seem discontent with religious authority, outdated "heroes," and the upper-class abuse of the poor. Yes, the skits are meant to be humorous, but this level of specificity and depth make it more likely that the Pythons offer critique through humour. The skits are more than a laughing matter. They are scathing remarks on Britain itself.

The Pythons needed something to go wrong because the intended effect is to make people laugh. To do so, they mixed together Spanish Inquisition, outdated authority, and British life. In the end, the portrayal of "inquisition" seems one of simple comedic purpose. That comedic purpose comes at a price since "inquisition" ends up playing the part of "something wrong." 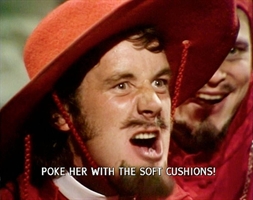 At this point, it is obvious that the Flying Circus skits are not at all consistent with historical documentation. The skits take place in the twentieth century, they feature fictional inquisitors, and they focus on the inquisitors' torturous desires. Further, they connect directly to their cultural context. This is different than other films in the project, which connect indirectly to their context.

Regardless of their humorous intentions and direct connections, the skits fail to produce much, if any historical accuracy at all. In fact, they go in the opposite direction for laughs. The Pythons add humour by portraying the inquisitors as fictional characters, having them run through twentieth-century Britain, and making them terrible torturers. Flying Circus may have twisted history for its own use, but by doing so, they created long-lasting humour.

1 The comedy group, Monty Python, is known colloquially as "The Pythons." They shall be referred to as such from here on out.
2 Jeff Sparrow, "Re-Reading the Famous Five and the Biggles Series Is Not Only Disappointing, It's Mystifying," The Guardian, November 25, 2014, https://www.theguardian.com/commentisfree/
2014/nov/25/re-reading-the-famous-five-and-the-biggles-series-is-not-only-disappointing-its-mystifying.
3 Darl Larsen, Monty Python’s Flying Circus: An Utterly Complete, Thoroughly Unillustrated, Absolutely Unauthorized Guide to Possibly All the References (Lanham: Scarecrow Press, 2008), 206.
4 There is one more important person behind the Flying Circus show, Ian MacNaughton. He was the director and helped keep the show from cancellation on multiple occasions. Much of his work, however, is background and technical. For a short biography, see "Ian MacNaughton, a 'Monty Python' Director, Dies at 76," New York Times, January 3, 2003, https://www.nytimes.com/
2003/01/03/arts/ian-macnaughton-a-monty-python-director-dies-at-76.html.
5 For a look at British life post-WWII, see the BBC's illustrated guide at http://www.bbc.co.uk/
history/british/timeline/present_timeline_noflash.shtml.