In the year 1974, Joseph Losey, an American filmmaker, made a film about Galileo Galilei, the famous seventeenth-century Italian astronomer and scientist who laid the foundations of modern science. This film, as many biographical films, is important because it contains information about a celebrated scientist. Considering, moreover, that movies are popular media through which many people acquire their knowledge of history, we can easily understand why Losey's Galileo is worth examining.

Despite its biographical flavour, however, Losey's film does not present Galileo's life in strict chronological order. Instead, the focus is on Galileo's struggle for the free expression of his scientific ideas in a world that suppressed this freedom. First, we see an enthusiastic Galileo setting out to change the astronomical scenery of his time. To do so, he uses the then newly invented telescope, and, by turning it to the sky, he manages to substantiate his revolutionary astronomical theories with facts derived from practical observation. In general, Galileo is portrayed as a man of science with a deep faith in scientific facts. Initially, he appears to believe that facts alone can convince the Roman Catholic Church of the truthfulness of his scientific theories. As the plot advances, however, the organised Church appears unwilling to 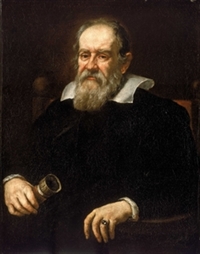 abandon her conservative beliefs, and, unlike Galileo, she is not only unaffected by scientific facts, but she also tends to ridicule them. Overall, Losey's Galileo portrays the fight between two worlds: the world of scientific progress, represented by Galileo, and the world of scientific suppression, represented by the established Church. In the first scenes of the film, we see an energetic and optimistic Galileo fighting for his revolutionary ideas, but soon, the oppressive Church and her powerful Roman Inquisition manage to both silence Galileo and force him to renounce his ideas publicly. Finally, the Roman Inquisition keeps Galileo under house arrest where, despite his public recantation, Galileo secretly continues to develop and write his progressive scientific ideas until the end. 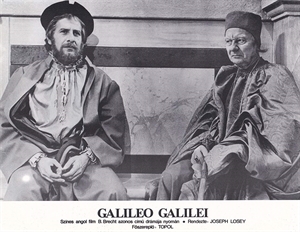 Through the film's dialogue, one gets the impression that the Roman Inquisition had a particular preference for a specific kind of punishment, namely, to burn the 'scientific dissidents' at the stake. Through a dialogue appearing in the third scene of the film, we see the protagonist, Galileo, revealing his recent scientific findings to his friend and mathematician Sagredo. In turn, Sagredo tells Galileo, "A while ago, when you were at your telescope I saw you tied to the stake… And when you said you believed in proof, I smelled burning flesh". Losey's negative portrayal of the Roman Inquisition, however, is not only verbal. The way the dialogue between Galileo and Sagredo is presented is equally interesting. Unlike Galileo, Sagredo, also a scientist, appears to have complied with the scientific standards set by the official Catholic Church and refuses to question them. So, it is perhaps not a coincidence that throughout the entire scene Galileo appears in white light and is dressed mostly in white clothes. In contrast, Sagredo's face is often hidden in shadows, and he appears to wear a white shirt which is almost overshadowed by his black overcoat. This difference in colour between the two men might have a symbolic meaning. Galileo, as a not yet compromised and free scientist, bearing the light of new ideas, is portrayed in white colours. Sagredo, an already compromised scientist, wears a white shirt, symbolising his scientific background that had been entirely overshadowed by a black coat, which, metaphorically speaking, can be seen as the scientific oppression that the Catholic Church imposed on scientists through its ferocious Inquisition.

Another scene wherein the Roman Inquisition is negatively portrayed is the masquerade ball-scene, which takes place at a cardinal's house in Rome. The interesting things here are the masks that the cardinals hold. At first, we see two cardinals holding masks of a lamb and a dove, but soon afterwards, the Cardinal Inquisitor comes in holding a pig-mask. This contrast between the symbolic meaning of the masks that the cardinals hold is, as I see it, an implicit reference to the hypocritical nature of the Roman Catholic Church. Indeed, Losey, famous for his preoccupation with the theme of hypocrisy,1 might have chosen to add a pig-mask —with its apparent negative symbolism— to the Cardinal Inquisitor so as to underline that the Catholic Church is not always as good as it claims to be. So, on the one hand, the two cardinals, representing the leading figures of the 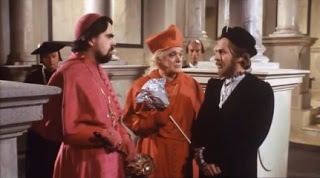 Catholic Church, appear to hold masks of a lamb and a dove, two animals which symbolise Christ's innocence, love, and peace. These are the foundations upon which the Church is theoretically based. But, on the other hand, when it comes to the practical side of the Church, the Inquisition, the real face of the Catholic Church is revealed, and this face is that of a dirty pig with all the negative associations that this metaphor carries. In Losey's Galileo, therefore, the Roman Catholic Church is presented as a two-faced institution, and the Roman Inquisition is undoubtedly the second and filthiest face of this institution.

The last scene of the film contains another example of Losey's negative portrayal of the Roman Inquisition. In it, Galileo is kept under house arrest, and there is always a monk responsible for keeping an eye on him. Here again, Galileo wears white clothes, having an inherently positive symbolism, while the monk, a representative of the Roman Inquisition, is dressed in total black. Throughout the whole scene, the monk speaks only twice, and his remarks are critical and caustic; then he remains mostly silent as an unattractive and shadowy figure, and his only concern is to check who enters the house and keep the doors double-locked. His anxiety to be a diligent warden is so high that it almost becomes stupidly comical when a goose is sent to Galileo, and before receiving it, the monk thoroughly examines it as if it is a dangerous bomb.

All in all, Losey's portrayal of the Roman Inquisition is negative. The whole institution, as well as the people associated with it, appear to be inflexible, authoritarian, with literally no interest in scientific progress. Further, the Roman Inquisition, despite its Christian roots, is presented as conservative machinery lacking pastoral love, compassion and sympathy, full of suppressive power, and as having willingness to destroy whoever questions or goes against it.

As every human product, Losey's Galileo is influenced by the cultural context of its time. The 70s, when the film was shot, was certainly not a tranquil period. Back then, the world was divided into two opposing camps: the countries following the communist worldview and the countries following the capitalist worldview. Given that, the 1970s was characterised by significant conflicts between these rival groups of countries, and people were much divided. Being a child of his own time, our film director chose his side, and he willingly embraced the communist worldview. His choice, however, came with a price, and that price was that he was forced to leave his homeland and "re-establish himself as a film director in Europe".2 So, Losey's strong leftist-communist leanings and negative impressions of organised religion, which includes the Church, must also have played their role in the negative portrayal of the Roman Inquisition and the Catholic Church that we find in his Galileo.

In addition, the post-war atmosphere was surely something that left its mark on the 1970s. Both the atrocities of the Second World War and the nuclear disasters of Hiroshima and Nagasaki were horrible events which might have long-since passed, but the huge impact they left behind still haunted the people of the 1970s. And, a general fear of a new nuclear bombing due to the high political tension between the communist and the capitalist countries continued to exist.

Following the above, we can say that the message of Losey's Galileo is mainly political and ethical. Our film, coming after the Second World War and the dropping of the atomic bombs on Hiroshima and Nagasaki, and, being in a society living in constant fear of a new nuclear disaster, is greatly concerned with "the dramatically new relationship between science and society during and following the Second World War".3 In view of this, the leading character of our film, Galileo Galilei, is not chosen just to be honoured "as the first modern experimental scientist", but he is rather used "as a symbol for all scientists who reject social 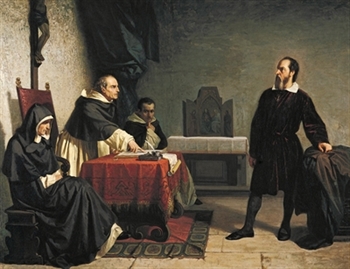 for their work…(and) produce the atomic bomb to suppress the people".4 Our film, therefore, focuses on Galileo, one of the founders of modern physics, to spotlight the "question of the responsibility of the scientist" as well as the overall future of contemporary science.5 Thus, the aim of Losey's film is not to present history accurately, but to use the historical past "for didactic purposes",6 which, in our case, are the catastrophic effects that science can have if it falls into the wrong hands. In the same vein, the Catholic Church and the Roman Inquisition are negatively portrayed not because this is the historical truth. Rather, due to Losey's left-wing political orientation, the above institutions are used as mere symbols of authority and its suppressive power7 and by contrasting them with the symbol of modern science, namely Galileo, the question about the ethical responsibility of science in an authoritarian world is highlighted.

Considering all the above, it is evident that the image of the Roman Inquisition presented in Losey's film serves symbolic, ethical, and political purposes, not historical. Thus, the negative portrayal of the Catholic Church might help raise a moral question about contemporary scientists and how they should deal with authoritarian regimes, but this should not make us think that the Catholic Church of the past and her Roman Inquisition were as historically bad as portrayed in Losey's Galileo.