The Black and White Legends

The Spanish Inquisition has long since been a black mark on Spanish history. Perhaps the greatest single reason for this is that a number of European countries began propagating a skewed version of history, the so-called "Black Legend". This legend is somewhat ambiguous but mostly claims that Spanish inquisitors were incredibly violent and sought to torture or execute whomsoever they desired. The legend mostly took hold in countries where Spain held power or had made enemies in the sixteenth century, places like modern-day Netherlands, Italy, and England. Each of those places had problems with both the Spanish monarchy and the Roman Catholic Church, meaning the Spanish Inquisition's intertwining of the two provided an easy target. While the "Black Legend" took hold for hundreds of years, recently a new legend has appeared, the "White Legend". This legend seeks to fight against what is perceived as propaganda and a distortion of history, deeming the "Black Legend" to be little more than "fake news". Regardless of which legend is closer to the truth, these two opposing views demonstrate the power of the past because the ripple effects can still be seen today. Indeed, many filmic representations of the Inquisitions, Spanish or otherwise, insist on purporting the "Black Legend". This article and the rest of the papers associated with this project will examine to what extent some of these modern representations of "Inquisition" are distorted.1

The "Black Legend" of the Spanish Inquisition is a movement meant to make the Kingdom of Spain look bad. In short, the "Black Legend" states that the Spaniards demonstrated barbarity and cruelty through their violent attempt to suppress religious dissidents. Those who supported this myth wrote books and essays focused on Spain's usage of torture. Other detractors created paintings depicting 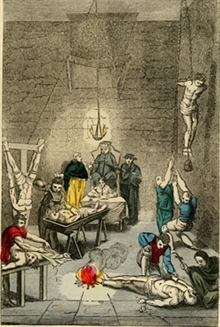 Spaniards using force and violence to keep both social and religious order. Perhaps worse, there are numerous accounts from Spanish authorities themselves which back up these claims. The Spanish Inquisition, with its blurred mixture of Church and State, did use torture and violence as a means to suppress religious dissidents, especially among those who had converted to Christianity from Islam or Judaism and then stepped back into their previous faiths. While the "Black Legend" certainly exaggerated the facts of the Spanish Inquisition, it is still based on historical truth. Yes, foreign powers had much to gain from a despised Spanish monarchy and Catholic Church, but there is evidence that they did imprison, torture, and execute a number of their own for crimes of religious belief.

Unsurprisingly, some of the largest proponents of the "White Legend" are members of the Catholic Church. New Advent, citing Joseph Blotzer, says that while there were a number of injustices associated with the Spanish Inquisition, the Roman Catholic Church voiced great concern over said injustices and the Spanish royalty quickly added safeguards against further abuse.2

Beyond Roman Catholics, the "White Legend" enjoys support from Spaniards who wish to see greater respect for their culture and history. The Hispanic Civilisation Foundation aims "to restore a lost sense of pride in the spread of Spanish culture".3 Spokesman Borja Cardelus says the problem is not the fact of the Spanish Inquisition, but rather the fact that "others, outside Spain, have been the ones making Spain's image".4 What bothers Cardelus about the "Black Legend" is not that it exists, but that he believes Spanish culture has been damaged by non-Spaniards. The "Black Legend" impacts more than Roman Catholics, and because it impacts Spain's cultural image, a greater number of people are calling for history to be re-examined.

At the far end of the "White Legend" stand those who believe the Spanish Inquisition, executions and all, should be celebrated. One such writer is Eleonore Villarrubia, an author who is part of the excommunicated Saint Benedict Center. Villarrubia believes that Spain's Inquisition is a positive thing because it led to more people converting to Catholicism. "To be Spanish was to be Catholic," Villarrubia writes, "and the Inquisition there was the instrument by which this was accomplished."5 For her, the Spanish Inquisition was a positive event in history because it held religious significance, and religious matters trump all else. So, while it is called the "White Legend", not all supporters seek to dispel the "Black Legend" as a stain, but rather to embrace it as a good thing.

What Does This Mean Today – Fake News or Fake Movies?

The Spanish Inquisition is a difficult topic, not only because it involves faith, patriotism, and personal liberties, but also because it has been the victim of propaganda since its beginning. The enemies of both Spain and the Roman 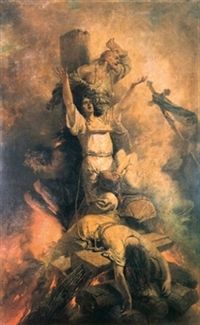 Catholic Church at the time sought to discredit both institutions simultaneously, so they greatly exaggerated the worst aspects of the whole event.

Recently, however, some have begun pushing back against the "Black Legend" by recognizing a more realistic account of what happened, reclaiming a positive view of Spanish cultural identity, and even celebrating the Roman Catholic Church's behaviour as laudable. In this way, both the "Black Legend" and the "White Legend" run the risk of being decried as "fake news". While the exact details of what happened are likely lost forever, looking at both these legends reveals one of the greatest difficulties inherent to historical study, namely the fact that the past is not an unchanging entity but rather has a tendency to change based on the viewer’s personal lenses.

It is that malleability, that unfixed and changing nature, which proves most applicable to this project. This project analyses multiple films, some serious, some ridiculous, but all steeped in historical malleability. Occasionally, films take advantage of this malleability and twist history to their own benefit. Monty Python’s Flying Circus is one such example. It leaves the viewer to decipher what may have actually happened and what is historic "fake news". Others attempt a more faithful recreation of history. The Crucible flaunts its own roots as an allegory in favour of historical accuracy. In the end, these films demonstrate the difficulty inherent to history – it reshapes and reforms year after year and day after day. History, it would seem, is not the concrete foundation upon which the present stands. Instead, it is what we make it.