The Titus Brandsma Institute (TBI), founded in 1968 on the basis of a cooperation agreement between Radboud University and the Dutch Carmelite Province, is a research centre for Jewish and Christian mysticism and spirituality.

We study the foundations, history and themes of historical and contemporary forms of Jewish and Christian mysticism and spirituality. The study of the spiritual culture, past and present, and of the various ways in which people have given shape and meaning to their spiritual quest is central to the TBI. 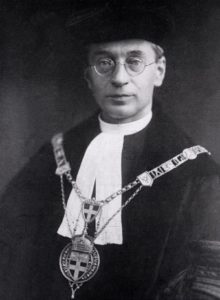 In the opening lines of Titus’s discourse on the Idea of God, given in 1932 at the Catholic University of Nijmegen, he says:

Among the many questions which I ask myself, none occupies me more than the riddle, that the evolving human being, proud and spirited in his progress, turns away from God in such great number.

It is disconcerting that in our time of such great progress in various area, we face, like an infectious disease, an insidiously spreading violation and denial of God.

Why is the image of God so obscured that so many are no longer moved by it? Is the failure only on their side? Or is there something asked of us to make it shine brightly again over the world and might we hope that a study of the concept of God will at least alleviate this greatest of all needs? > Read the speech on the Concept of God 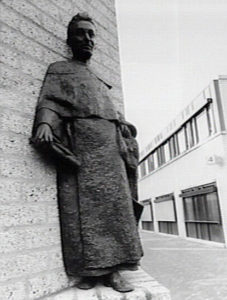 ‘As I look with you at this bronze sculpture of Fr. Titus Brandsma, I should like to direct your gaze to what seem to be two opposing differences, which actually harmonise together. Firstly, a contrast which is somewhat geometrical. The location of Titus’ sculpture should certainly be in the vicinity of the Faculty of Philosophy to which he was connected as a professor, and in the vicinity of those ‘means of communication’ with which he was increasingly concerned in the days of Naziism, war and occupation. A particular wall in the Thomas Aquinostraat was considered to be a fitting location for the sculpture. However, the wall stands at an angle of 45 degrees to the direction of the street. This sculpture of such an ‘accommodating man’ needs to stand facing the direction of the daily flow and activity, it should not be closed off or deviating from it. Therefore, such a location could well ignite some conflict. If you reflect on the figure which stands there and certainly in relation to the direction of the street, there is barely enough space to accommodate the right side of the sculpture, whilst the left side has ample space. However, such a location gives the opportunity to work creatively with a relief which speaks both of constriction combined with perfectly free standing elements.

What first come into relief are the head, foot and hands, with the left hand being weighed down by two gowns with their many folds. This representation seeks to form a tranquil whole with a clear contour. Where one aspect is meaningfully emphasised another aspect suggests restraint.

The other contrast which asks to be resolved is somewhat less concerned with the physicality of the sculpture and more with the person of the ‘Pater-Professor’. What is particularly noteworthy regarding this contrast is the description in the speech: ‘More than a professor’.

Yet it was Titus’ professorship which fuelled the desire to locate his sculpture on this site. I have attempted to show that this professor is first and foremost, and from the very depths of his innermost self, a neighbour and fellow Christian. Here, my interpretation arises out of playing with the idea of his two gowns. He carries his professorial gown of silk, velvet and lace over his left arm (and the edge of the sculpture is aligned with the side of the street). But his simple Carmelite habit is the tunic which affirms his life.

In his stance and in the expression of his face I have endeavoured to characterise his qualities of approachability and helpfulness, and yet at the same time show something of his introversion for study and prayer. This synchrony of the one with the other somehow seems to characterise the whole of his life, even up to the point of imprisonment, sickness and death.

May that which presents itself as an antithesis and which therefore asks to be reconciled, continue to captivate us through its inner tension’.